When is Monsoon Season in Las Vegas? 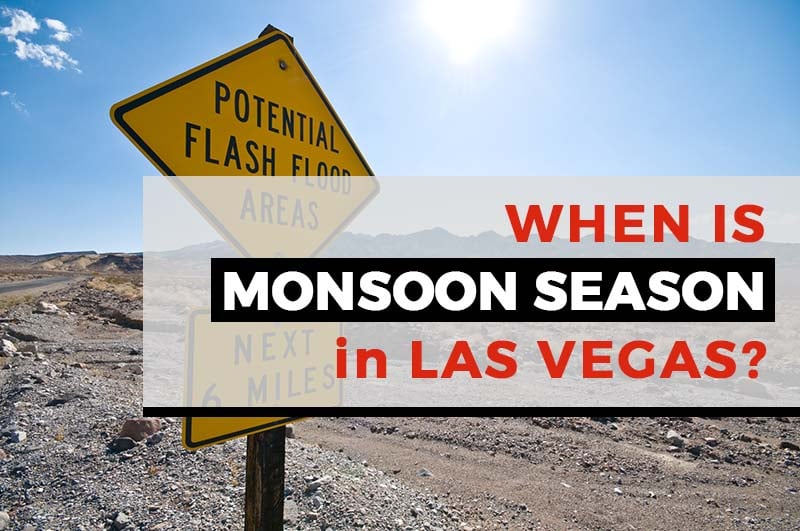 If you're a new residential or commercial property owner in Las Vegas, there are a lot of things you should know about our valley. Undoubtedly, you know that our weather is beautiful for most of the year. You’ve probably been warned about the intense heat of the summers and enticed by the mild winters. Well, there is one more seasonal weather change that Vegas experiences yearly, and that is the “monsoon.”

In Southern Nevada? Schedule Your Roof Inspection Ahead of the Monsoons. Call (702) 739-7663 or request a free estimate →.

The word “monsoon” translates as “season”; specifically, it refers to the change in wind patterns that brings with it rain. Across the southwestern United States, monsoon means intense summer thunderstorms. Yes, even deserts occasionally get rain. These heavy summer thunderstorms help the desert flora to survive the rest of the typically dry year. In fact, Las Vegas receives more than half of its yearly rainfall during the monsoon. This is especially impressive since the monsoon is the shortest season of the year.

When Is the Monsoon in Las Vegas?

So when exactly does this season start? Generally,the Las Vegas monsoon season starts in July. However, it can sometimes come as early as the middle of June, catching people by surprise.

How Long Is the Monsoon in Las Vegas, and When Does It End?

Again, this rainy period doesn’t last for a very long time. In comparison to the rest of the year, the rain seems never-ending, but in reality, monsoon season only lasts a few months. Starting in the middle of summer, the monsoon generally ends midway through September. At this time, the storms become less intense and eventually the desert climate begins to cool down for the coming Fall. In 2017, the monsoon ended around the first week of September, but there were still some light rain showers throughout the rest of the month as the weather cooled down.

The monsoon brings with it a very interesting weather pattern. The days begin as sunny, hot, and more humid than usual with a partially cloudy sky. By the early evening, the winds will pick up, and the sky will darken as large storm clouds move over the area. Then the heavy wind, lightning, and rain starts and does not stop until the late evening. On occasion, it will be very intense for but an hour or two before letting up. The next morning, the cycle begins again.

You may guess that these summer rains bring with them some welcomed cooler temperatures. You’d be wrong! These are actually hot summer showers, even though the water falling from the sky may feel cold. In fact, the rain only brings the high summer temperatures down by a few degrees. The air feels heavy and muggy, and the sky is filled with clouds. Although for those people used to wetter climates, it probably only feels mildly damp.

These summer rains are a welcome respite from the rest of our dry year, and many people look forward to the monsoon. The mornings after a rain shower feel especially clean and fresh.

2 Things You Should Know About the Monsoon Weather Season

There are a few things that property owners in particular need to know about this special time of year. Even though the monsoon can be a welcomed season for the desert, Las Vegans have realized just how dangerous it can be for people and property. The monsoon brings heavy thunderstorms that can result in severe flooding and damage to property. In Las Vegas, where driving from place to place is essential, the torrential downpour sometimes makes commuting impossible.

The Dangers of Flash Flooding

Many of the streets in metropolitan Las Vegas become fast moving rivers, and the flash flooding can cause car accidents or worse. The National Weather service will issue flash flood warnings and advise people to stay where they are rather than risk getting their car stuck in a flooded area. Emergency service providers are often on call during these thunderstorms to help those people and vehicles stranded in the water.

Secondly, the monsoon can expose existing damage to roofs and flood buildings and homes. What does all this mean for property owners? Because our climate is so amazing most of the year, some property owners might not know that their roof has damage until the first torrential downpour. This flooding could end up costing them a small fortune, not to mention the risk of water damage, mold growth, and the potential to lose business.

Even though our climate is relatively dry and sunny all year round, don’t be fooled by living in the desert. Unfortunately, for those property owners who are unprepared for the monsoon, it means thousands of dollars of roof and building repair work for the damage caused by these summer storms, which is not fun if you didn’t even know you had roof damage until the monsoon was already underway.

This is why it’s important to have your roof inspected by a reputable roofing company regularly. Inspectors can alert you of any weak spots or cracks in your roof before the monsoon hits the valley. The repairs for these types of issues cost much less than having to replace an entire roof or deal with water damage.